ACL injury not enough to keep athlete down 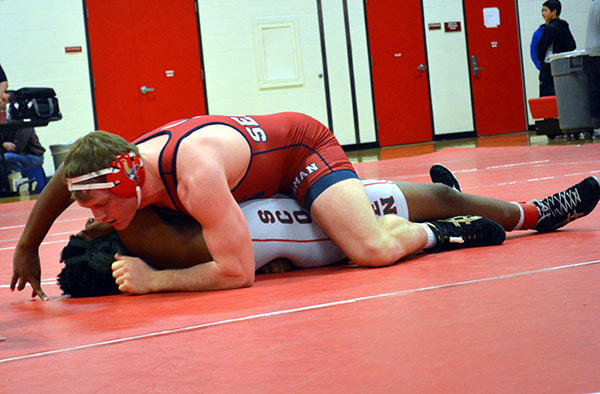 Six months ago, Senior Bailey Kelly had surgery to repair a torn ACL. Many people across the school, district and league felt terrible for the kid with his senior year of football and wrestling still ahead of him. However, this sad day turned into nothing but motivation for the determined young athlete.

“My biggest motivator was definitely my dad.  He never stopped pushing me and I owe him a lot,” said Bailey Kelly.

This determination took him all the way from being perhaps done for his wrestling season to being a state champion in class 5A.

“I was really determined because it’s something I’ve always wanted, and it was my last chance to do it,” said Kelly.

Kelly won the first three preliminary matches on Friday to get him into the finals. His final competition set him up against the number one ranked wrestler, Dylan Prince, in the class. Bailey had lost to him earlier in the year but was given the chance to get his revenge.

This match was nothing less than expected in a state championship. The score was tied 1-1 with only 17 seconds remaining which is when Kelly made a move. He knew time was running out which spurred him to go on the offense, receiving takedown points and back points.

“I knew I had to score to win, but then it just kind of became a blur from there,” said Kelly.

This gave him a 5-1 victory and the state championship. This put Kelly at 116 career victories which ranked him No. 2 on the all-time list here at Seaman.

“It felt amazing mostly because that kid beat me earlier in the year and the whole knee situation was hard to go through,” said Kelly.

As for the knee, Kelly made a very quick recovery. Most people return to their sport at about the six-month mark. Bailey defied that by coming back at about the four to five month mark.

“My knee felt good I don’t really notice it while I’m wrestling but after the match it would hurt a little sometimes, but nothing I couldn’t handle,” said Kelly. “I made sure to memorize the healing prayer, and I said it every day, so it helped a lot to have God on my side.”

His biggest motivator, his father, is also the head coach for the Vikings wrestling team.

“Seeing Bailey come through and reach his goal of a state title was just a flood of emotion for me,” said Coach Kelly. “Even if he had not won, as his coach and especially as parents, Lisa and I would have been equally proud just for the effort he put forth.  But because he did win makes it like a fairytale. I just thank God for the outcome.”