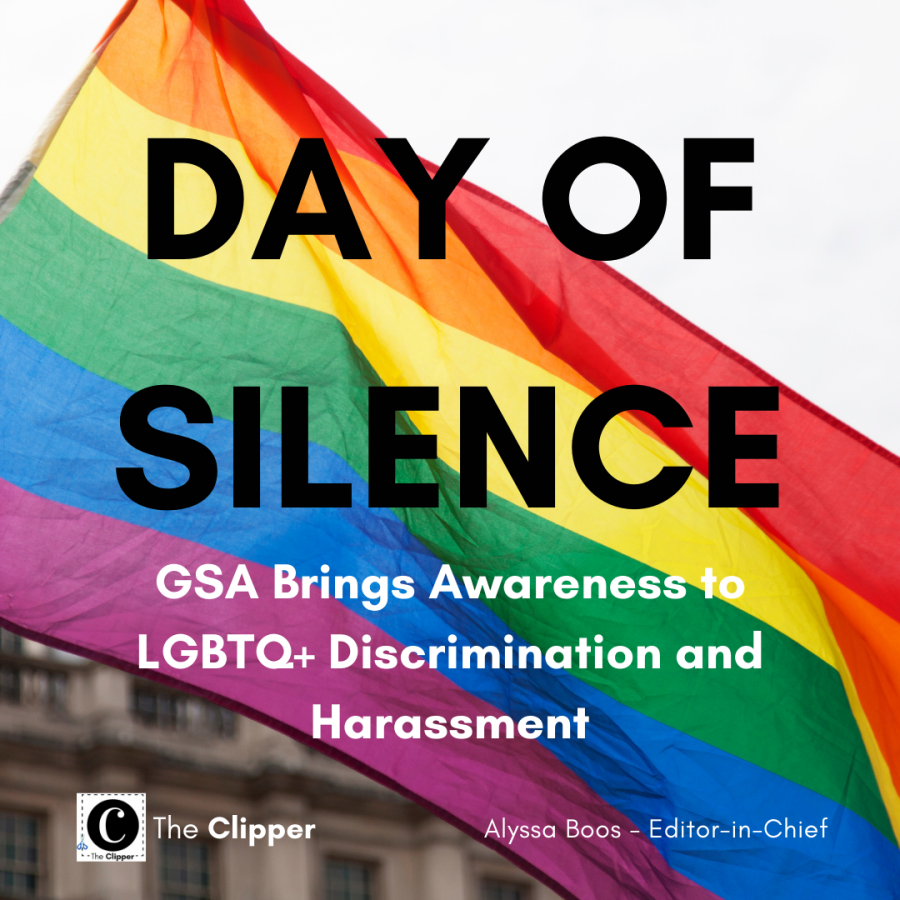 On Apr. 22, 2022, the Gay-Straight Alliance Club decided to organize and participate in the annual Day of Silence, hosted by GLSEN. The Day of Silence happens every second Friday of April, and is a day-long vow of silence to bring awareness to the effects of bullying and harassment, especially towards the LGBTQ+ community.

“GSA decided to take part in the world-wide Day of Silence to speak up against hate and discrimination of queer people, but to also show we still need to make more progress. I hope this event shows that we won’t be silent against phobia and bullying,” sophomore Jasper McNellis said.

Beginning in 1996, two students, Maria Pulzetti and Jessie Gilliam held the first Day of Silence at the University of Virginia. The next year in 1997, the event spread to over 100 colleges throughout the United States.

Although this day is mainly to spread awareness to harassment and bullying of gay, transgender, lesbian, queer, and questioning people, allies of the LGBTQ+ community, or people who have also faced discrimination or harassment for their race, ethnicity, gender, etc are also welcome to participate.

“Hopefully, more people will join in [on] the Day of Silence for themselves. It’s not just for LGBTQ+ members, but anyone who has been discriminated against for any reason can join in, as can allies. Not only do I want to do this for myself, but also as an ally to those who face discrimination that I don’t,” senior and GSA Officer Possum Grader said.

Both Grader and McNellis have experienced discrimination or harassment based on their gender identity or sexuality before, and have been determined to tell their stories and let people know that it’s okay to speak up and take room for yourself.

McNellis said, “Our school should show that we do respect all by using more inclusive language and cracking down on bullying on the bases of being gender diverse or not being straight. I’ve been called slurs and derogatory things in our own hallways on a weekly bases, told to kill myself by students, and even discriminated against because I’m transgender.”

GSA hopes to help expand the inclusivity of the community and has taken measures to help show awareness to the challenges the LGBTQ+ community faces. Just recently on Apr. 1, 2022, GSA held a walkout to call attention to the anti-LGBTQ+ bills being passed throughout the United States.

“I think that teaching students to be inclusive would be best. I’ve had a lot of transphobia thrown my way not by teachers, but by students. All my teachers that I’ve had work with me, but students seem to not understand that their words do damage, and that they can get in trouble for what they’re doing. Letting students know they’re not going to get away scot-free from their discrimination would, in my eyes, help with making the school more inclusive,” Grader said.

GSA hopes that this event, along with the others they have organized, will call attention to those who have felt silenced at any point in their lives, and can make them feel like their stories matter, and that they themselves matter.

“Those who are marginalized by the majority don’t have to say anything unless we want to, and our stories deserve to be heard,” Grader said.